Nationally the Government have been running the Back To School Safely campaign to reassure parents that school are safe places for their child to be, and that the risks associated with not returning to school are far higher. The Chief Medical Officers of all UK nations are backing this campaign and I know parents getting in touch with me are keen to see their children back in school.

Locally I worked with a number of partners locally to deliver a Crewe & Nantwich Virtual Jobs Fair. We had more than 600 job vacancies from minimum wage to £100,000 roles from dozens of different employers. I was prompted to organise the fair after hearing the news of redundancies at Bentley. I want to thank everyone that helped put it together. Importantly, it is all online to be accessed over the next few weeks, full information below.

I had lots of great visits as well including to Minister of Yoga, Community Recycle Cycles, LS Gymnastics Academy and to an amazing young lady called Skyla who at age 3 gets on her toy tractor and cycles round her area picking up litter! Watch a great video with her below.

Finally, after researching it as a solution and campaigning for it for more than a year, Cheshire East has now obtained an injunction to protect Barony Park from illegal encampments. Part of the evidence used in court to obtain it was the residents survey I ran so thank you to everyone that completed that. I know there are other areas that are repeatedly affected and I will work with residents on these going forward. 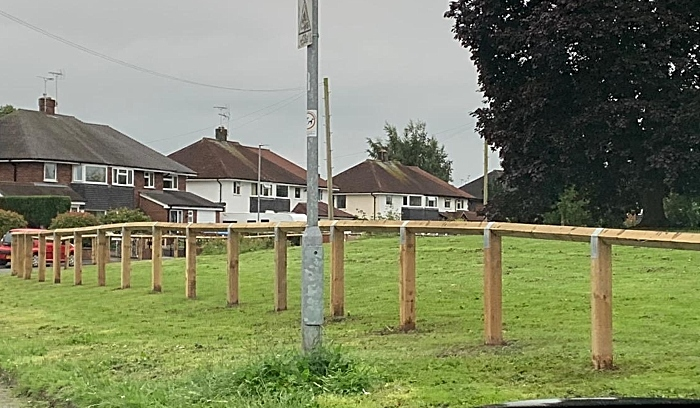 We received some fantastic news last week that the High Court in Manchester has granted an injunction to Cheshire East Council which will ban unauthorised encampments on the Barony Park for the next 2 years.

This is something I campaigned on, first suggesting it as a solution more than a year ago before I was the MP (https://www.cheshire-live.co.uk/news/chester-cheshire-news/tory-mp-candidate-calls-court-16481901) and getting the advice of legal experts (https://thenantwichnews.co.uk/2019/08/28/legal-expert-backs-campaigners-injunction-bid-for-barony-park/).

I want to say thank you to all who took part in the survey I ran on people's experience of these encampments. These findings were vital for the court to understand the impact they have on local residents. I also wish to thank the Friends of Barony Park for all of their hard work and efforts.

This result combined with the new fencing shows that we are finally making progress on this issue.

Back to School Safely: 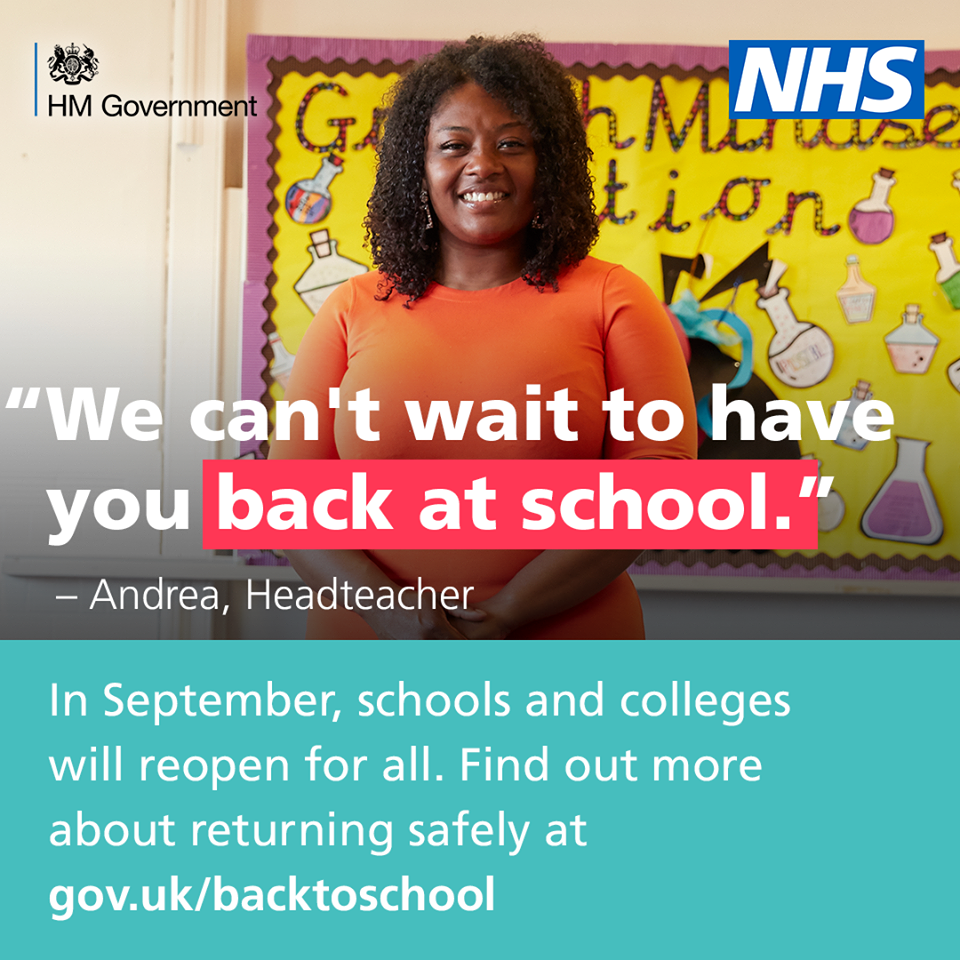 Last week the Government launched it's #backtoschoolsafely campaign aimed at reassuring parents and students ahead of the return of schools in September. Schools have received guidance on measures they should take to ensure the safety of both staff and pupils. This includes:

Alongside this the Government is also providing £40 Million for alternative forms of transport to alleviate potential pressures on public transport. 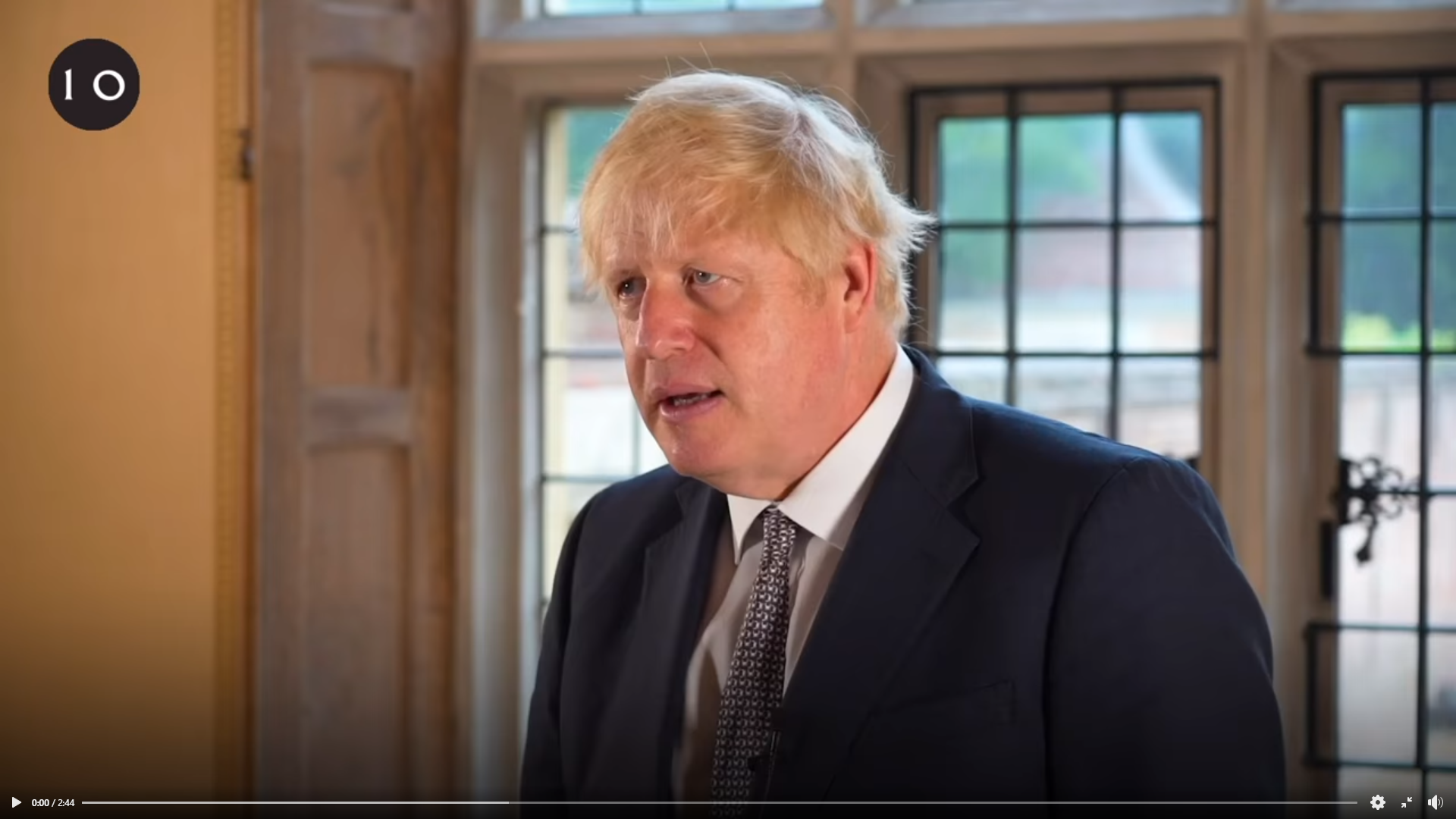 Above is a video from the Prime Minster, Boris Johnson, outlining the importance of children returning to school in September.

Due to the great lengths that teachers and schools have gone to in preparation for the return of pupils, parents can be reassured that schools are safe enough for all children to return. The risk of them catching Coronavirus while in school is very low and the risk of them suffering ill health from it lower still.

The importance of the return of schools however cannot be overstated. It is critical for the development, academic prospects and the physical and mental health of the next generation that they get back into the classroom.

I hope the leaders of the teaching unions will be constructive in supporting school staff and leaders to achieve this important goal. 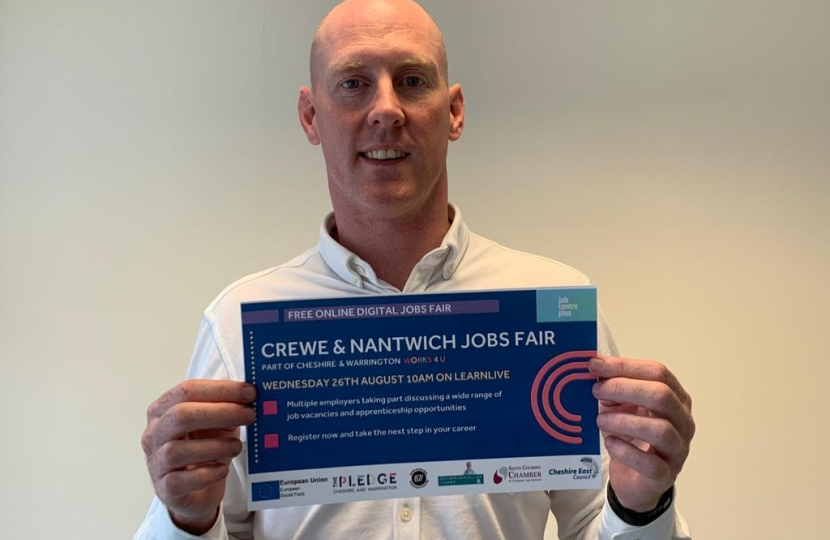 On 26 August I worked with Cheshire & Warrington Pledge and Local Enterprise Partnership, Cheshire East, Job Centre Plus and the South Cheshire Chamber of Commerce to run a virtual jobs fair under the Cheshire Works 4 U programme.

Many employers had signed up on a local and national basis up from a wide range of sectors including logistics, health and social care, public sector and utilities.

The Chancellor Rishi Sunak MP had given his support, recording a video message to open the fair.

The day itself was very busy and fast paced. I think it was a superb jobs fair and let’s hope many people round Crewe and Nantwich gain employment from it. I want to thank everyone involved in putting the fair together as I know a lot of hard work was carried out and also a massive thanks to everyone who participated.

I already know of a number of people who have interviews from attending the jobs fair but please let me know if you attended and whether you were able to apply for any jobs.

Those unable to take part in the live event can watch the job opportunity videos and the question and answers with employers online at https://learnliveuk.com/cheshire-works-4-u-event-2/ 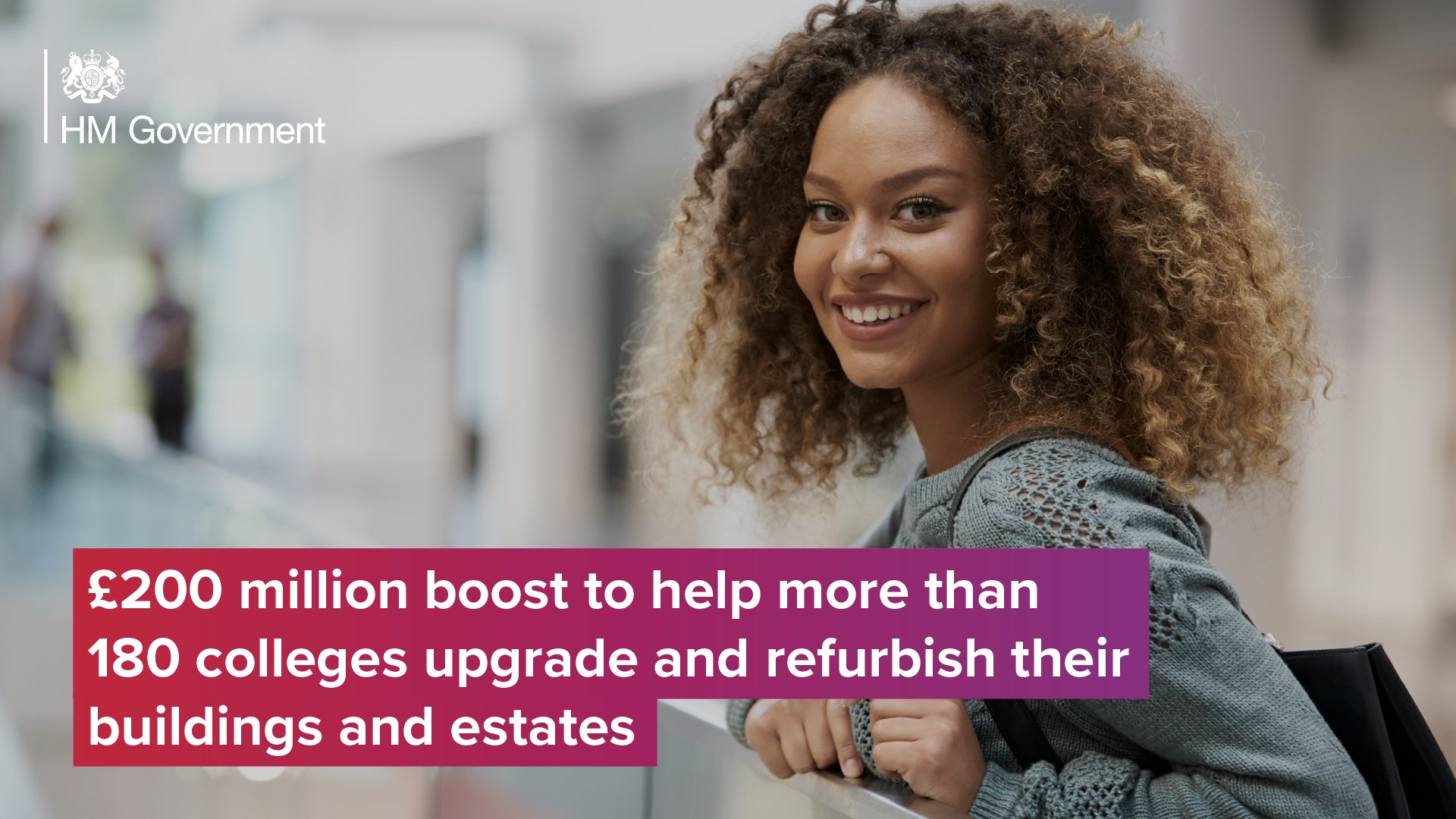 The Government have announced a £200 million program for repairs and refurbishment to further education buildings and campuses, which includes over £1.2 million for Cheshire South and West College.

These repairs and refurbishments, which will begin immediate work for this September, will help build towards our ambition for a world class education system. 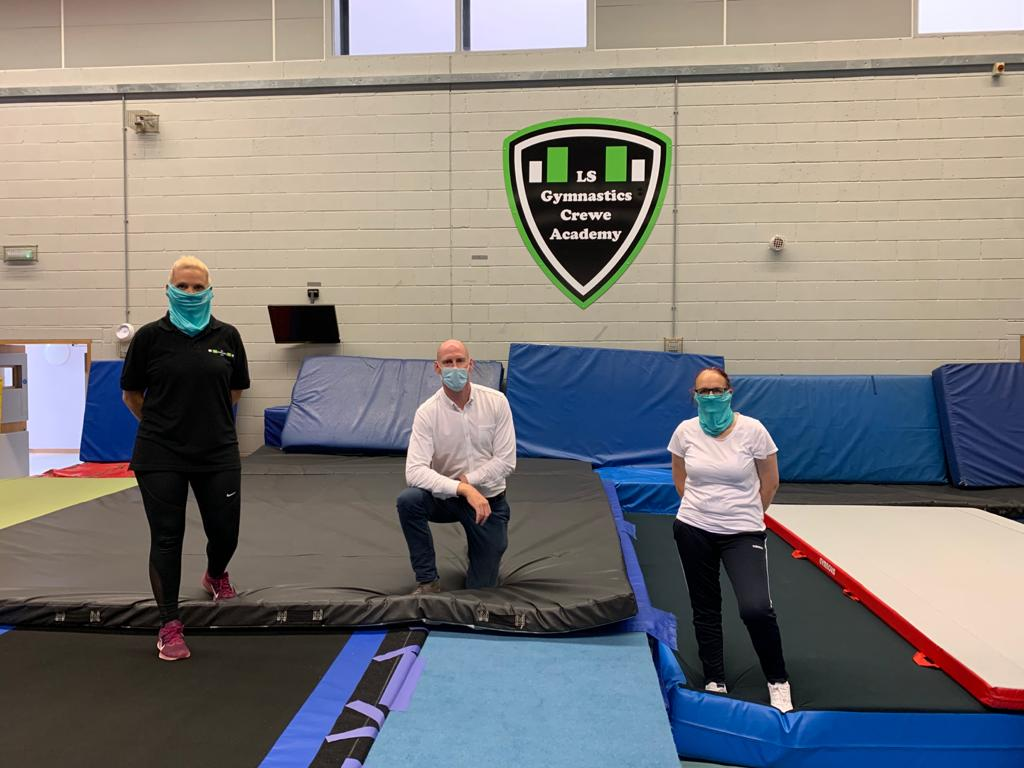 Big shout out to LS Gymnastics Crewe! Maybe you want to try a somersault on a trampoline some time-they can help!

LS Gymnastics Crewe Academy is based at the old MMU site and has reopened its doors after totally revamping its approach to training sessions to allow small cohorts of gymnasts to move between activities with cleaning being undertaken in between.

I got to visit them this month and I was hugely impressed by the drive and commitment of Candy and her team to support their young people in particular. Meeting and speaking with some of the gymnasts it came across very strongly how important their gymnastics is to them. I want to congratulate Candy and all the staff and volunteers for the inclusive approach they have at the heart of what they do.

I know lockdown and not being able to go out has made people give a second thought to the importance of investing in their own and their children’s physical and mental wellbeing. It might be gymnastics, it might be something else, but I’d encourage everyone to give something physical a try if they haven’t before.

Originally run from Sir William Stanier Sports Hall, the family run club moved to the new expanded site last year. Prior to lockdown the club saw more than 600 gymnasts training every week, including elite GB team athletes. The dedicated, 30-strong coaching team includes elite national coaches for both the British men’s and women’s teams. Gymnastics training at the Apollo Buckingham Campus is available for all abilities, including disabilities and pre-school gymnastics, and is open to gymnasts from across the north-west.

If you want to give it a try their website is www.lsgymnastics.co.uk. 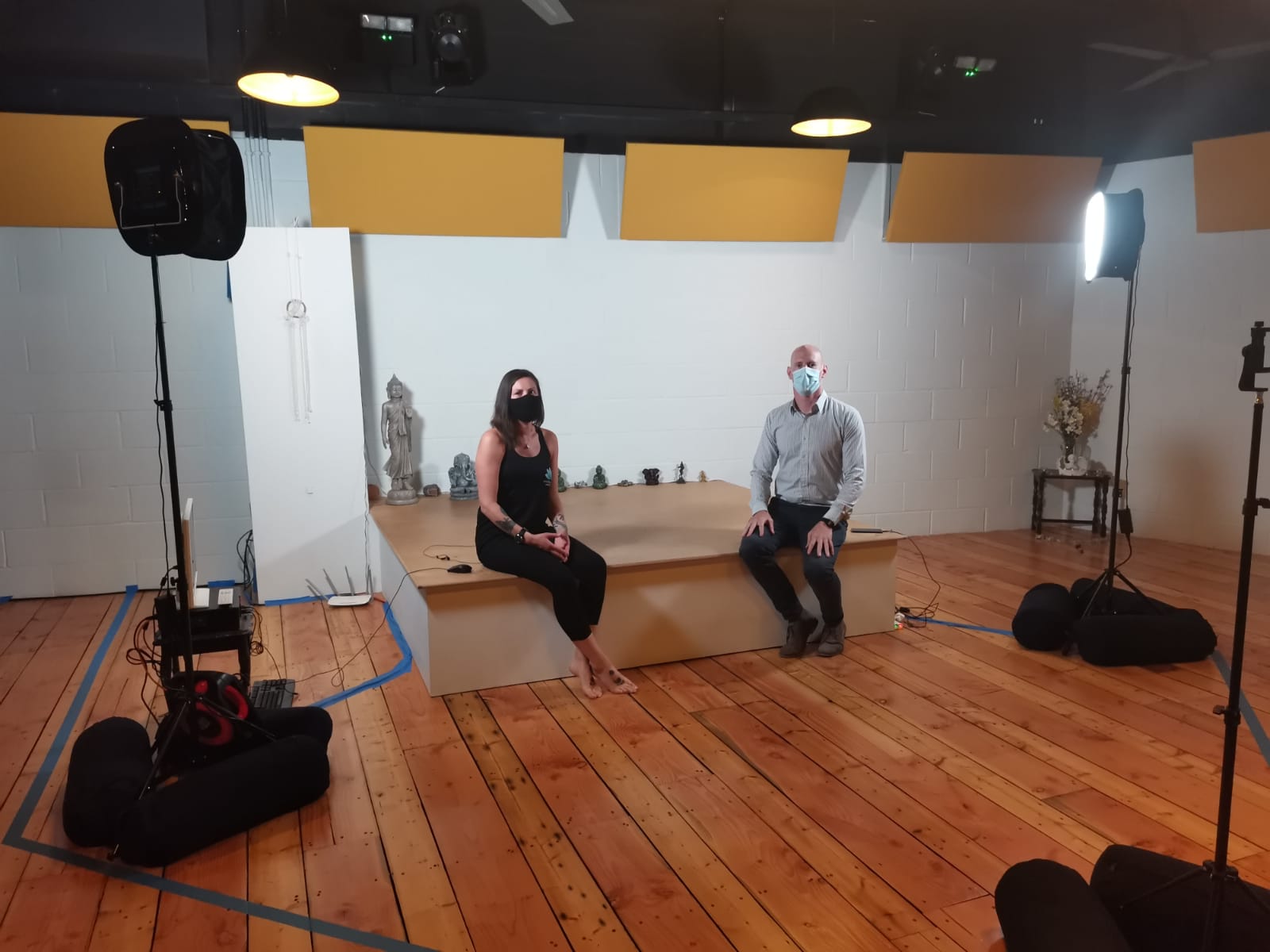 On Tuesday I visited the Ministry of Yoga in the centre of Crewe. I really enjoyed seeing and hearing about all of the work that they do at the centre. It is a fantastic facility hidden away just off the Nantwich Road just across the road from Aldi.

Yoga is one of those things that people don't always take seriously. But actually we are learning more and more about the health benefits you get because it is a great combination of relaxation and physical exercise. More and more people are using it including national sports teams like the England Rugby and Football squads (Owen Farrell lifts lid on recovery workout that England Rugby World Cup stars love and World Cup: England stars relax with yoga after stunning quarter-final victory over Sweden).

Great for your back, great for your breathing and at the prices here compared to many places great for your bank balance as well. I think it is one of those things you say to yourself you might try one day but never do. Maybe this year post lockdown is the year you bite the bullet!

The team of Yoga and Pilates teachers are extremely experienced and deliver classes for all ages, abilities and experience.  The Ministry of Yoga also delivers the Yoga4Health GP referral scheme, in partnership with Alternative Solutions Social Prescribing Service and HealthBox CIC.  The next Yoga4Health & Nutrition Project starts in September 2020.  It is a 10 week protocol that GP’s, social prescribers and NHS staff can refer patients to that have the following conditions; diabetes, obesity, cardiovascular conditions and depression.

It is fantastic to have a centre which does so much to improve the health and well-being of residents right in the heart of the constituency. It also has a great cafe in a location that is a little hidden away. I sampled their yoghurt cake which was amazing! 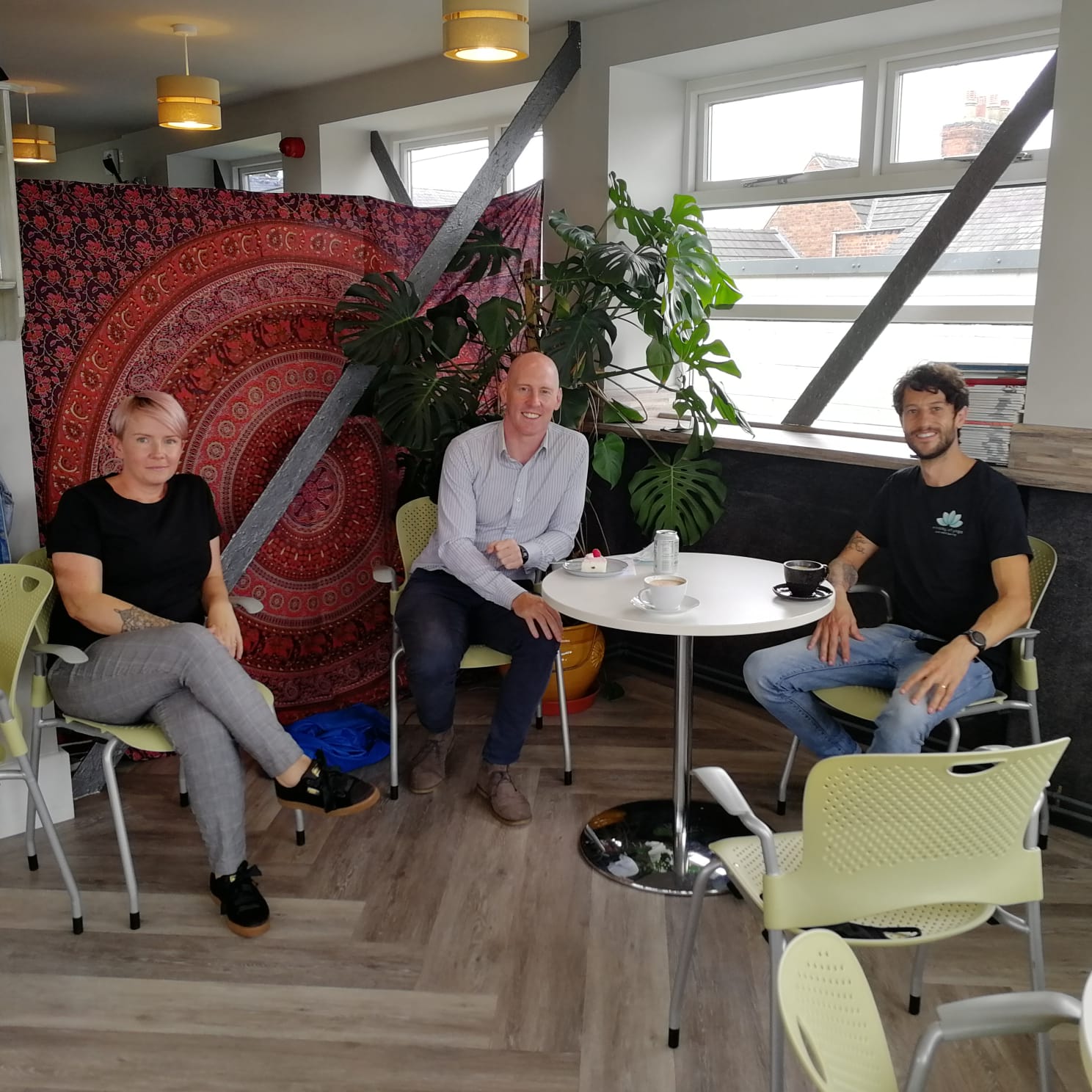 Check them out including their online classes which are a great way to give it a try:
https://ministryofyoga.org/ 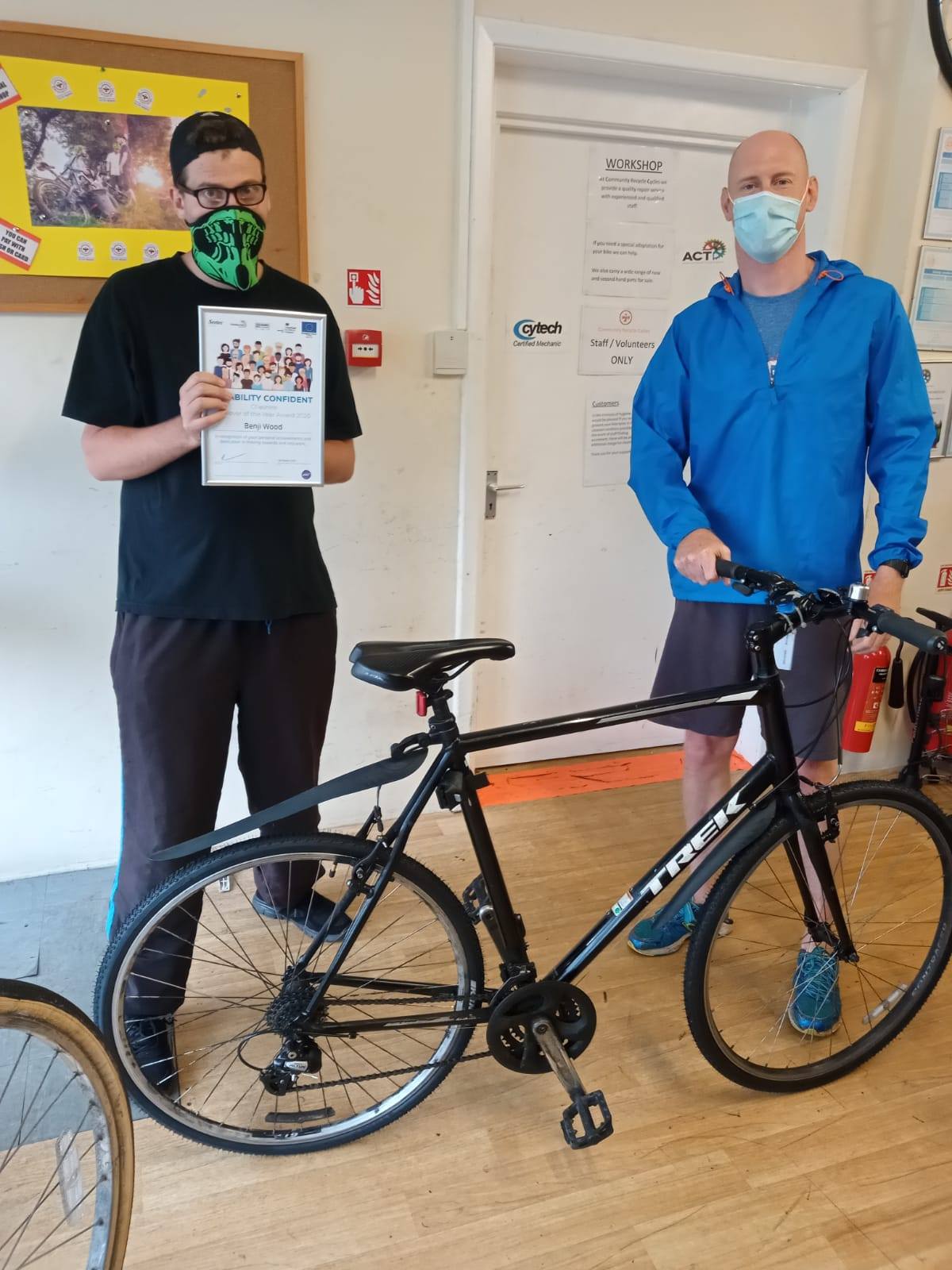 As expected, Community Recycle Cycles did a great job fixing my bike!

Going back to collect it gave me the chance to meet again with Benji Woods who I nominated to receive the Achiever of the Year award in March as part of a local event aimed at encouraging employers to embrace the skills and talents that people with disabilities or health conditions can bring to the workforce.

As well as refurbishing and recycling donated bikes from the general public Community Recycle Cycles provide volunteering opportunities and training often for those with additional needs, providing them with a pathway for employment.

Benji previously attended an SEN school and had struggled with his concentration, reading, writing and comprehension. He had developed a keen interest in bicycles and decided he wanted to do something more challenging. In 2019, Cheshire East Council’s Supported Employment team helped to identify a suitable volunteer placement for Benji, introducing him to Community Recycle Cycles in Crewe. Here Benji learnt to prepare the bikes to be sold in the shop, initially starting off with a mentor, but now able to get on with his work without support. The placement has enabled his confidence and self‐esteem to grow and he has moved on to helping with more complex tasks.

I asked Benji what he liked about at CRC and he said “I like working here as I love repairing the bikes and it has given me the confidence to get really good at something. I am quicker now than some of the people that taught me.” 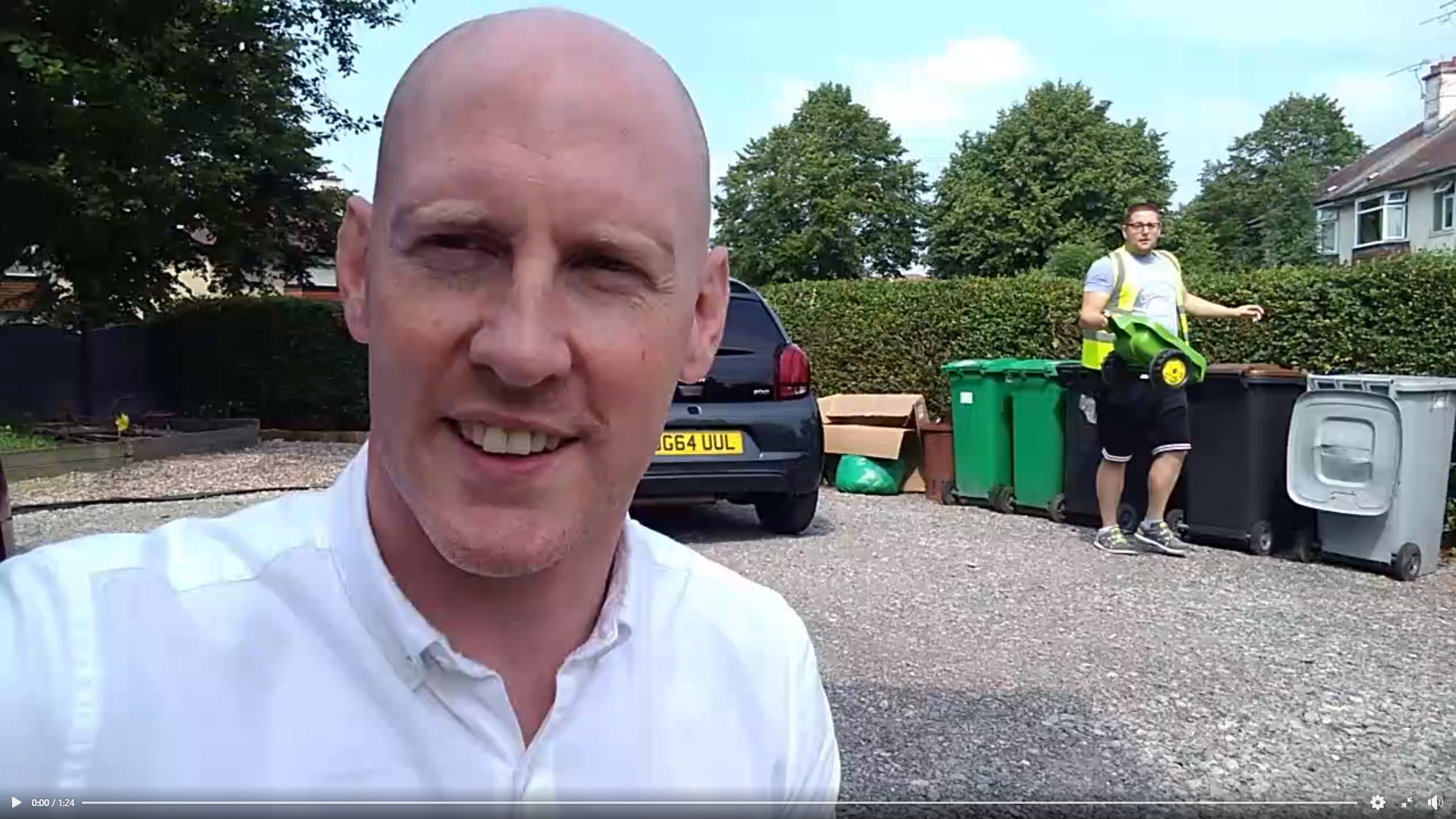 Last week I met 3 year old Skyla, a community star in Crewe we can all be proud of who can be seen out and about patrolling with her tractor collecting litter! It was great to meet her with Crewe Clean Team and give her a certificate and our thanks. Her Mum and Dad can be so proud!

Thanks to ANSA for her vest and picker.

We shouldn't have to pick litter because people don't take responsibility for their rubbish, but it is great to see such a young person taking pride in their local area. If you want to help keep your area tidy I can put you in touch with local litter pick groups (email kieran.mullan.mp@parliament.uk)

Life should mean life for child murderers. For most people I know that isn't a controversial thing to say. But that hasn't been the reality.