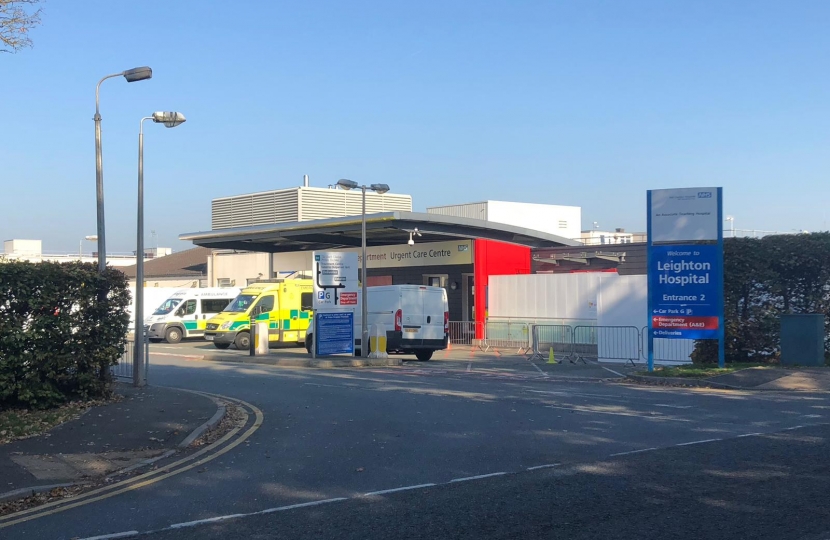 In September this year the Conservative Government announced an additional £145m of capital funding to be made available for A&E Departments to support them during the winter period.

The NHS quango NHS Improvement was tasked with managing bids for funding. Mid Cheshire Hospitals Foundation Trust made a bid for £1.4 million pounds. This funding request has been denied.

Dr. Kieran Mullan is asking local residents of all parties to call on NHS Improvement to think again saying “The Government made this money available for good reason-because it knows services are under pressure. Leighton is under pressure and the hospital managers were clear they could make use of the additional money. NHS Improvement needs to urgently go back into discussion with the hospital managers. Extra capital funding might sound technical but it can mean at busy times patients aren’t waiting in corridors on trolleys, that there are rooms for doctors and nurse to see patients-it can make a real difference.”

“I have written to NHS Improvement to tell them they need to think again. Residents can sign my petition to support our community in getting the right response. This isn’t a party political issue.”

“If NHS Improvement weren’t completely happy with the funding bid they need to urgently work hard to reach agreement with the hospital managers. Patients would expect nothing less.”

“Of course Brexit is dominating politics at the moment. But the public want politicians to carry on campaigning on other issues important to them as well. I’m doing just that.