Provisional plan for the Barony published 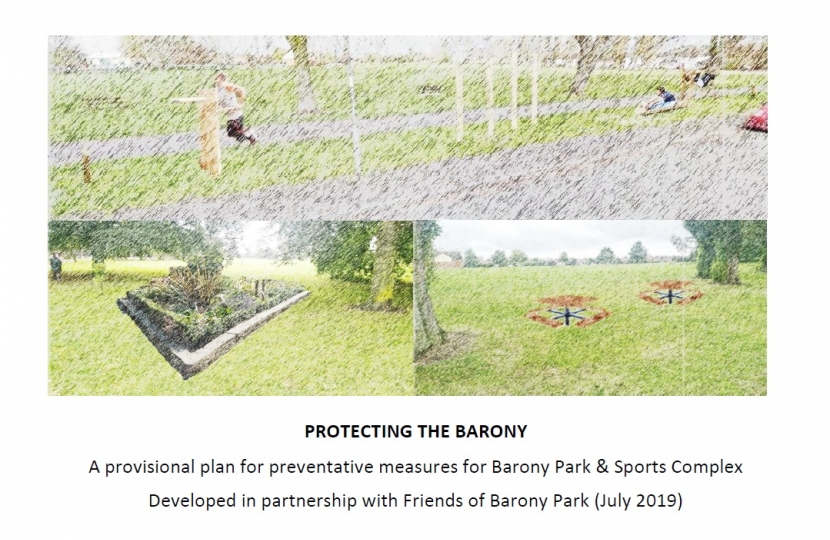 The Barony Park and Sports Complex are at the heart of Nantwich and are used by all different parts of the community for various sports, dog walking, picnics, events and more. In 2019 alone there have been 9 unauthorised encampments on the grounds with the latest one just today.

Earlier this year an evidence collection exercise put into black and white the problems associated with the encampments to make the strongest possible case for action. 142 residents took part. The report described widespread anti-social behaviour. Particularly concerning were reports of what can only be described as dangerous driving with a number of residents fearing it was only a matter of time until someone was seriously injured. The report can be downloaded here.

As a short term step I have proposed that Cheshire East Council apply for a court injunction to allow for more rapid action to be taken when an illegal encampment arises. This idea has now received support from across the political spectrum. I continue to believe it is the best short term action we can take.

During the evidence collection exercise residents were also asked if they supported the introduction of barrier of preventative measures to reduce the risk of an illegal encampment being established in the first place. 90% of participants supported the introduction of a barrier. However, there are a wide range of possible approaches to the introduction of a barrier. Importantly, I wanted to dispel the idea that this would mean introducing an entire perimeter fence which might detract from the current open nature of the complex. In discussing this issue with residents including a number from Friends of Barony Park, they advocated a more creative approach -using a variety of measures in different spots and taking advantage of existing barriers. Residents were also keen to use the opportunity to enhance the Barony with new features.

This provisional plan was created through a focus group style walk around of the perimeter with members of the Friends of Barony Park who tried to think creatively about what they would like to see introduced. Their contribution was invaluable. Included in the group was a resident with professional expertise on introducing barrier measures of this type. Working together we came up with some exciting ideas including

The full provisional plans can be downloaded at the bottom of this page (please note this is a large file). We also need to consider adding measures for Coronation Gardens at the same time.

A spokesperson for Friends of Barony Park said "We have tried our best to come up with ideas that will work for everyone. That way we can improve what residents get from the Barony at the same time as solving a problem. We encourage everyone to show their support."

All the main political parties in Cheshire East want to find solutions to this problem. I hope this plan makes a positive contribution to allowing us to move forward.

Give your views on the plans here: