This week I visited the team at the vaccination centre at the Masonic Hall in Willaston. Many of you know about the amazing programme being run at the Honda site in Crewe by Hollowood Chemists Ltd.

Raj and Jainil have done such a great job, supported by Roger at Crewe Honda Centre, and now they are being helped again by the team at The Lodge who have very generously allowed them to use their venue for a second site. We really needed this site as the GP sites shut, so I am really grateful they stepped up to the plate when asked by the vaccination programme.

And if you haven't yet got yours, please do get your jab! You can book here. They will be running two walk in days next week on Wednesday 4th and Thursday 5th August between 9am and 7:30pm. They will be providing 1st and 2nd doses of the Pfizer Vaccine to those above age 17 years and 9 months. Tell friends, family, colleagues that havent got around to getting their jab about this quick and easy way to get one.

Luke Hall MP, the Towns Fund Minister, visited Flag Lane Baths, as one of the projects to be funded from the £22.9 Million investment for Crewe. It was great for Rev David Edwards and his team to explain directly to him about the plans they have for the site.

The Government this week announced its plan to crack down on crime, making streets and neighbourhoods safer. This comes as we approach the half-way point of our manifesto’s police recruitment program, with almost 10,000 recruited since the election. Personally, I am continuing to campaign for tougher sentences for criminals. It is only fair that the most dangerous and serious offenders are locked up for longer, giving families and victims the feeling that justice has been served. But read below about some of the other measures being put in place like tagging of convicted burglars when they come out of prison.

Last weekend I put on my rugby boots for my first rugby match in 18 months with some team mates from Crewe & Nantwich for a charity match. It was good to get back at things. Maybe you got out of the habit of something during lockdown. No time like the present to get back out there!

Have a lovely weekend. 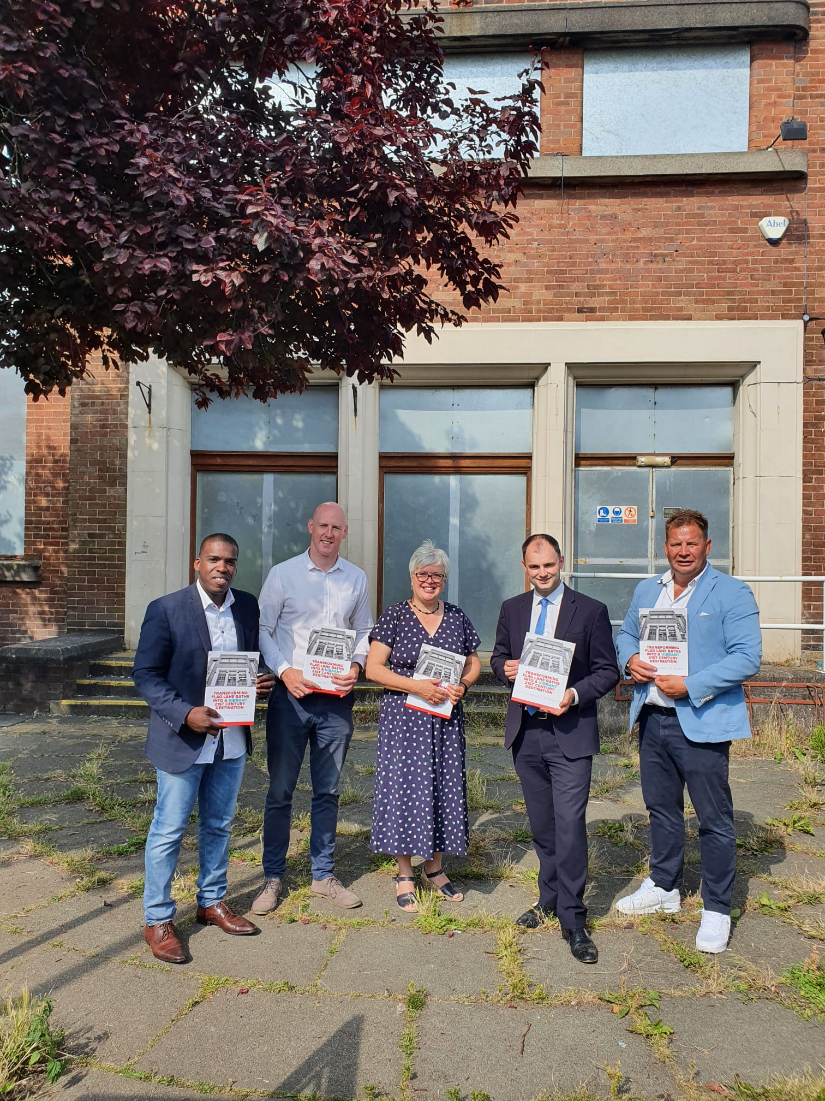 Towns Fund Minister Luke Hall MP visited Flag Lane Baths in Crewe this week following the announcement that the regeneration of the baths is one of the community projects that will be funded by the government's Crewe Town Deal.

The Minister met with the team from the Always Ahead Charity who are behind the proposal including Chief Executive Rev David Edwards, Chair Sheron Ferguson and Campaign Committee Chair Andy Morris. Town Board Chair Doug Kinsman and other town board members and local councillors were also there.

There are no better ambassadors, and no one has worked harder for this project than David, Sheron and Andy and the team which is exactly why I wanted the Minister to get the chance to hear straight from them about their vision and ambition for Flag Lane Baths. Of course what you need to deliver these projects is funding and the Government is putting that in for this project alongside lots of other projects which will help Crewe build back better. It will also help create jobs and opportunities locally. I was elected by people who want to see change for Crewe. This Government is determined to deliver this and so am I.

To remind everyone, last week it was announced that Crewe would receive £22.9 million of funding from the governments £3.6 billion investment in towns as part of the government's plan to level up the regions.

Speaking after the visit Minister Hall passed on the following message to me.

“It was great to have had the chance to visit the baths and hear first hand from Rev David Edwards what a huge opportunity this is and the difference the funding is going to make. This is a magnificent building and David and his whole team have put a huge amount of time and effort into writing clear plans for getting it back into community use. It is a great example of the kind of things we want the Towns Fund to be doing and I congratulate David, the Town Board Chair Doug, the whole team for putting forward such positive ideas for how to level up Crewe. This Conservative government wants to deliver for communities that have lost out to some of the big cities for too long.”

We should be able to showcase more detail about the rest of the projects that will be funded in the future so watch this space! 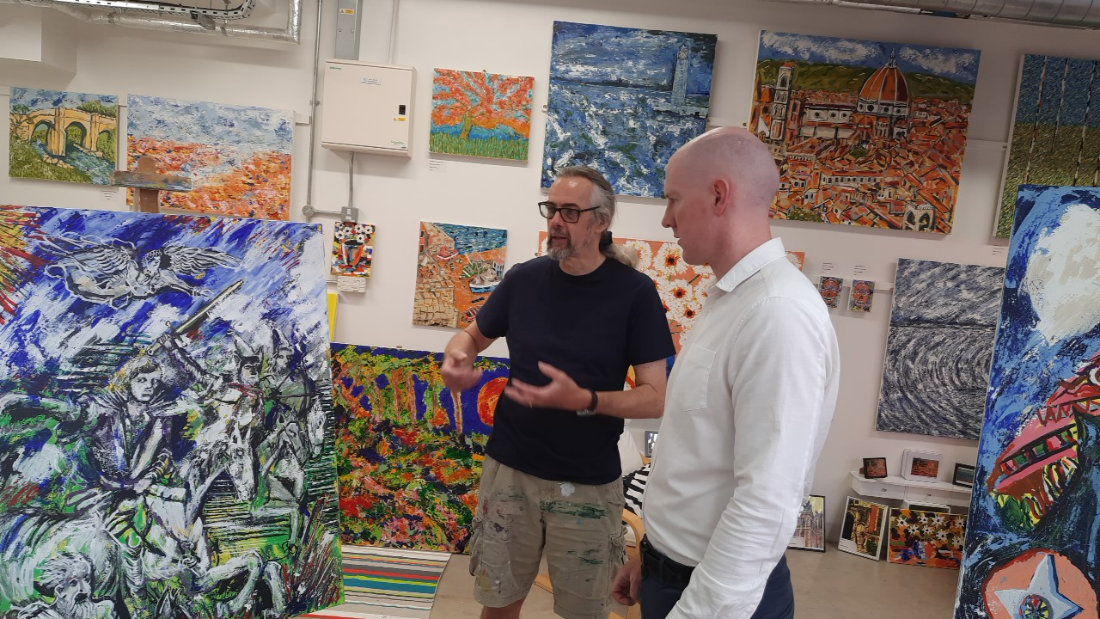 It was great to be able to speak to some of the market holders during the official opening at the weekend. For so many of them this is their first venture which takes so much courage! I am really impressed with the determination shown by people like Samantha at Buttery Biscuit Base, Hannah Wattle & Home and Teja at Crewe Asian Store.

It was fantastic to also chat to David Jewkes Art who is helping us with the mural that we are painting for the Crewe Alleyway Project. 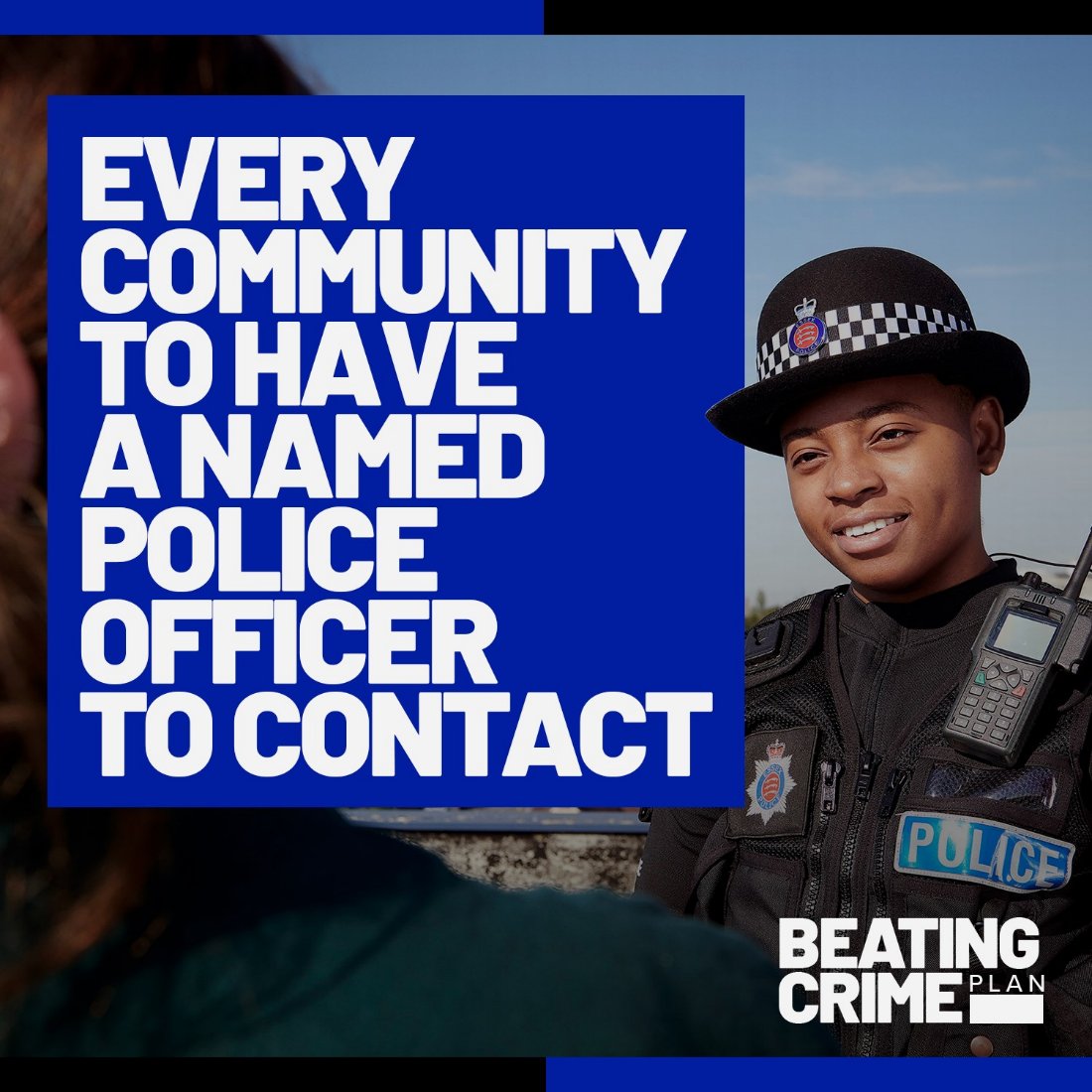 Everyone has the right to feel safe and secure in their own homes and neighbourhoods. The Government has this week launched its 'Beating Crime Plan' to provide police with what they need to stop and crack down on Crime. This includes:

- Making unpaid work more visible by getting offenders to clean up streets, alleys, estates, and open spaces, and ensuring justice is seen to be done

- Trialling the use of alcohol tags – which detect alcohol in the sweat of offenders guilty of drink-fuelled crime – to address the fact alcohol is a significant driver of crime, playing a part in 39% of all violent crime

The measures build on progress to date, such as toughening sentences to keep the most dangerous offenders behind bars and the delivery of almost 9,000 of the 20,000 extra police officers promised by 2023 – one of the Prime Minister’s first commitments in office.

I will carry on campaigning for us to lock up the worst most serious offenders for longer. 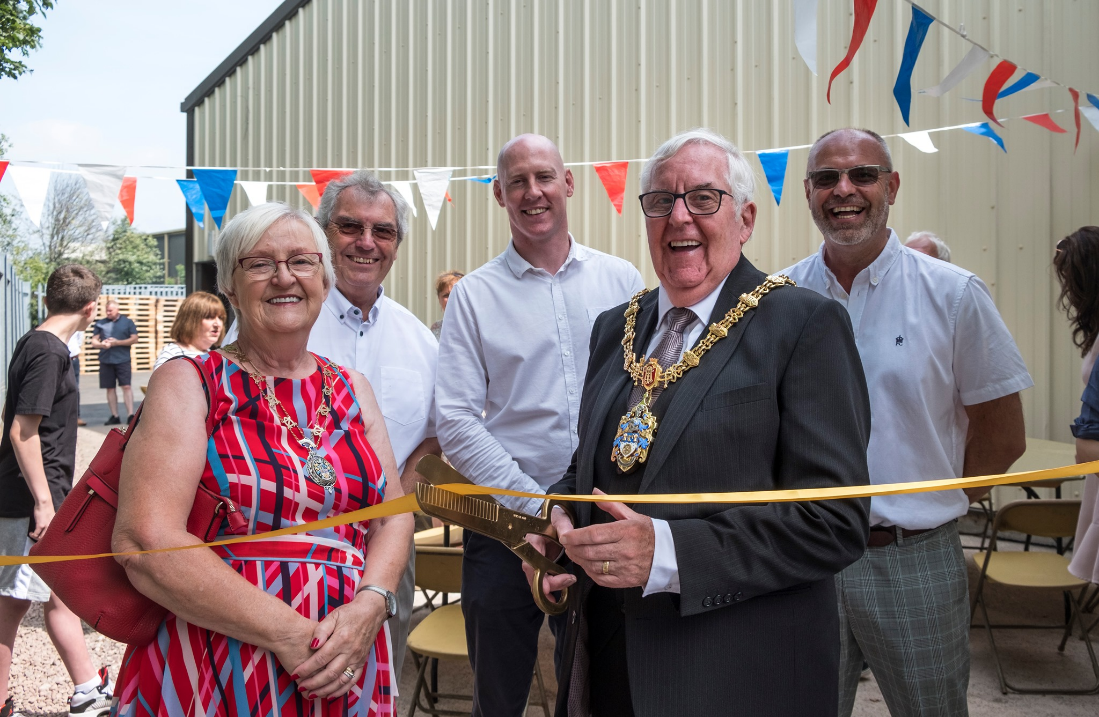 Last week I visited Repclif Chemical Services, a family run business, to celebrate their 50th Anniversary. It was brilliant to not only celebrate this great achievement, but also to speak to their apprentice Lauren and a new recruit Ross who started out with them as part of The Springboard Project.

The Mayor and I officially opened an outdoor space for their staff created by care leavers and virtual school students in partnership with Cheshire East, giving them some valuable hands on experience and skills.

Investing in young people and improving their talents and skills is key for the success of businesses and Repclif are passionate about supporting people in the local area, as you can see. Thanks to Ivan and all his team! Here's to 50 more years! 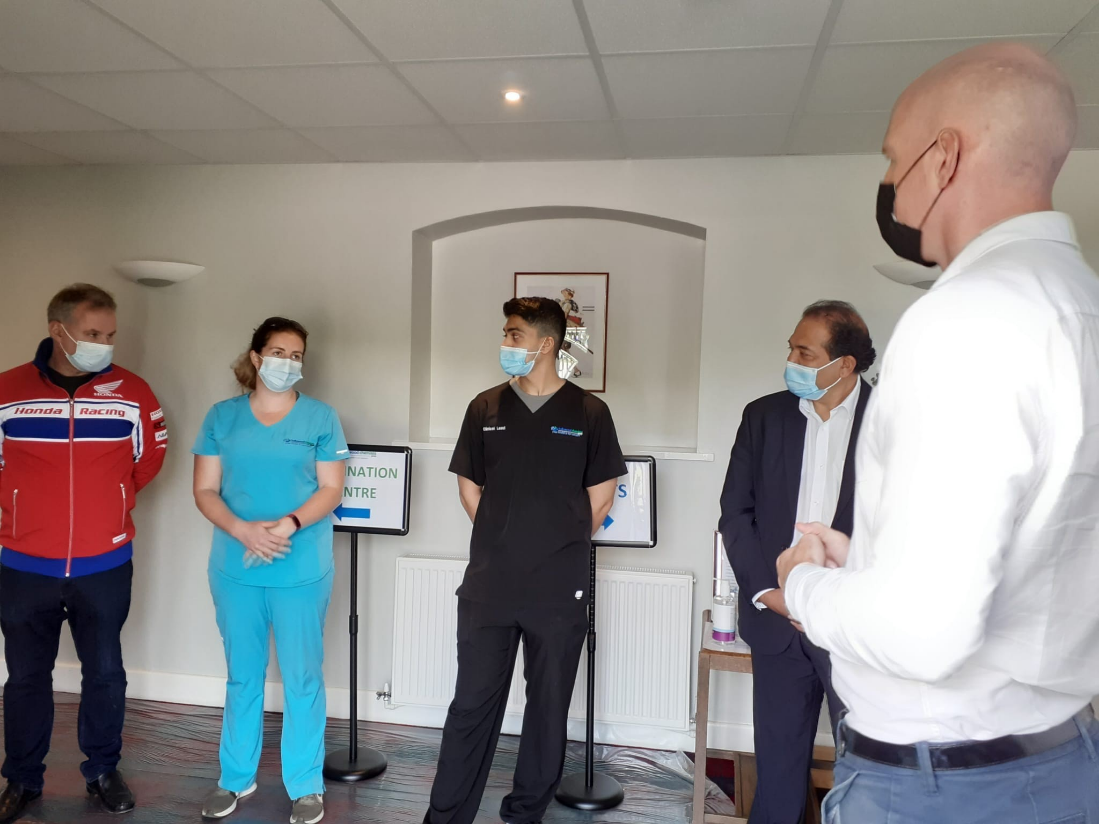 This week I visited the team at the Vaccination Centre at the Masonic Hall in Willaston. Many of you know about the amazing programme being run at the Honda site in Crewe by Hollowood Chemists Ltd.

Raj and Jainil have done such a great job, supported by Roger at Crewe Honda Centre, and now they are being helped again by the team at The Lodge who have very generously allowed them to use their venue for a second site. We really needed this site as the GP sites shut, so I am really grateful they stepped up to the plate when asked by the vaccination programme.

It was delighted to be able to visit Raj and Jainil to thank them for their efforts which have no doubt saved countless lives over the past few months. Thank you for all that you have done! And if you haven't yet got yours, please do get your jab! 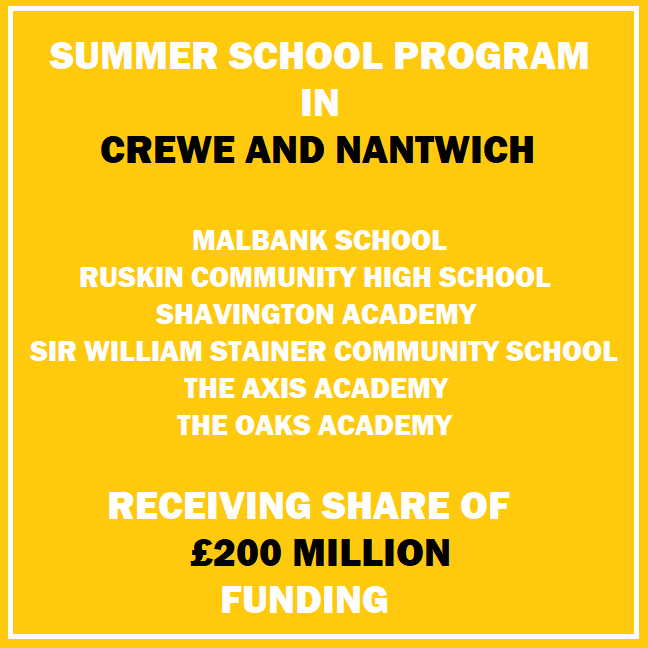 It is clear that the disruption of the past year and a half has affected children's education. Summer schools have been shown to increase the progress made by students, which is why I am pleased to see that the Government is making £200 Million available for school programs during the summer. Local schools taking part include:

The schools will be able to target these programs to those students who need it most, but incoming year 7's will be particularly encouraged to help with their transition to high school. 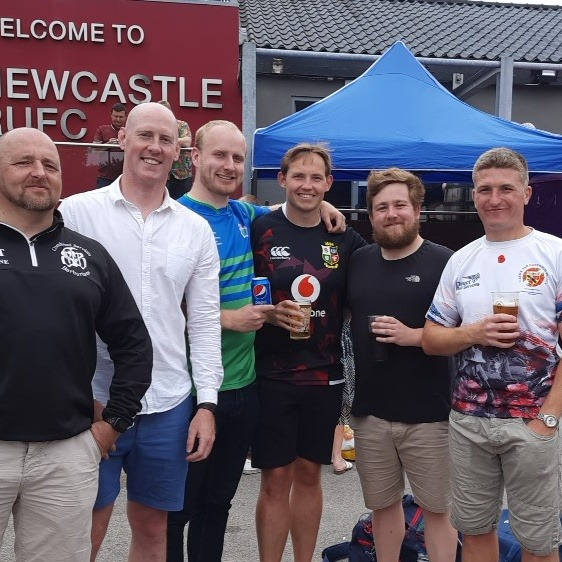 Fantastic turnout from Crewe & Nantwich RUFC players who put on their boots for a charity match at the weekend which raised money for young Crewe Alexandra Football Club player Ashton Hulme, who made it down despite feeling poorly from treatment this week. Tough little fella! You can donate here: 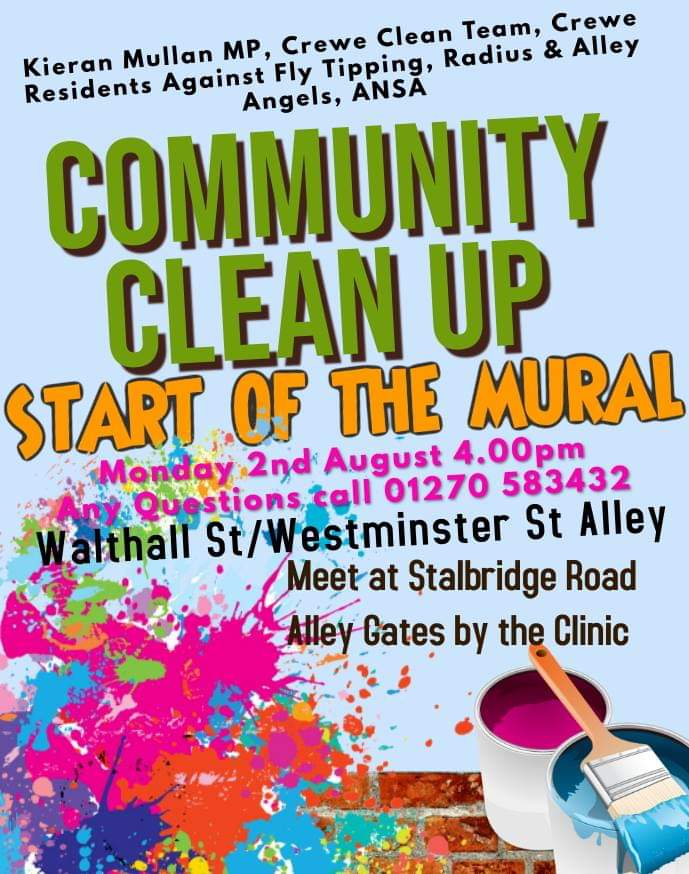 We are starting the mural on Monday as part of the Westminster Street/Walthall Street community project working with the Cleaner Crewe pilot. Just the base layers but exciting still!

It was also great to lend a hand with the Cleaner Crewe pilot team on Derrington Ave this week, another great effort from lots of partners led by residents.

After months of waiting and promises to put forward proposals that would be fair and reasonable, I am sorry to say we have got no further forward in getting fairness for Crewe & Nantwich residents and businesses when it comes to car parking charges.