The Prime Minister has announced important changes to the measures we should abide by in the fight against Coronavirus. From Monday we should all follow the rule of 6 which limits, with a few exemptions, the number of people who can gather socially to 6. The new guidelines will be easier for people to understand, and for the police and authorities to enforce. See more about why this was done below.

I try to avoid party politics, its my least favourite part of being an MP, but this week there have been some pretty poor examples of the local Labour party misleading people on my views and what the government is doing for both fire safety in relation to Grenfell and Beechmere and funding for Leighton Hospital this winter. They are saying Leighton isn't getting extra help and that simply isn't true! I decided it was important I set the record straight below and at the same time want you to know I am campaigning for major new investment in Leighton Hospital.

There was good news in regards to the success of the Eat Out to Help Out scheme, both nationally and locally, with over 81,000 meals being discounted throughout August in Crewe and Nantwich.

I am also looking for employers locally that want to take part in the Kickstart Scheme where you take on a young person on the minimum wage paid for by the government to help get them on the career ladder and to try and avoid a repeat of the damage done to young peoples first career steps we saw in the financial crisis during what may be a difficult time in coming months.

The Government also announced that we have signed a Free Trade Agreement with Japan. This deal goes beyond the one Japan already has with the European in many areas and is the first major deal Britain has signed as an independent, trading nation.

The Fire Safety Bill was voted on this week which aims to improve fire risk assessment and prevention. You may have have heard that the Labour party put forward an amendment to the Bill requesting that the Government immediately put into place recommendations from the Phase 1 Report of the Grenfell Tower Inquiry.

I have been following this issue closely because of the fire at Beechmere. I have written for the Parliament magazine (https://www.politicshome.com/news/article/sustainability-and-safety-should-go-hand-in-hand-ignorance-is-an-enemy-of-both), I have been trying to get information for Beechmere residents about the fire investigation from Cheshire Fire and Rescue and I joined an All Party Group on Fire Safety.

I couldn't vote myself because the day before it was due someone I was in close contact with developed corona virus symptoms so I had to self isolate until they got a test. Thankfully their test was negative and I was back voting later this week.

But the local Labour party have since said I do not care about the victims of the Grenfell tragedy or Beechmere residents.  In his closing remarks following the debate the Minister, James Brokenshire MP, explained that there is currently an ongoing consultation with stakeholders about the recommendations. He confirmed that the Government has the intention to implement all recommendations however the consultation should be allowed to run its course before a formal decision is made. Labours amendment would not have sped this process up. 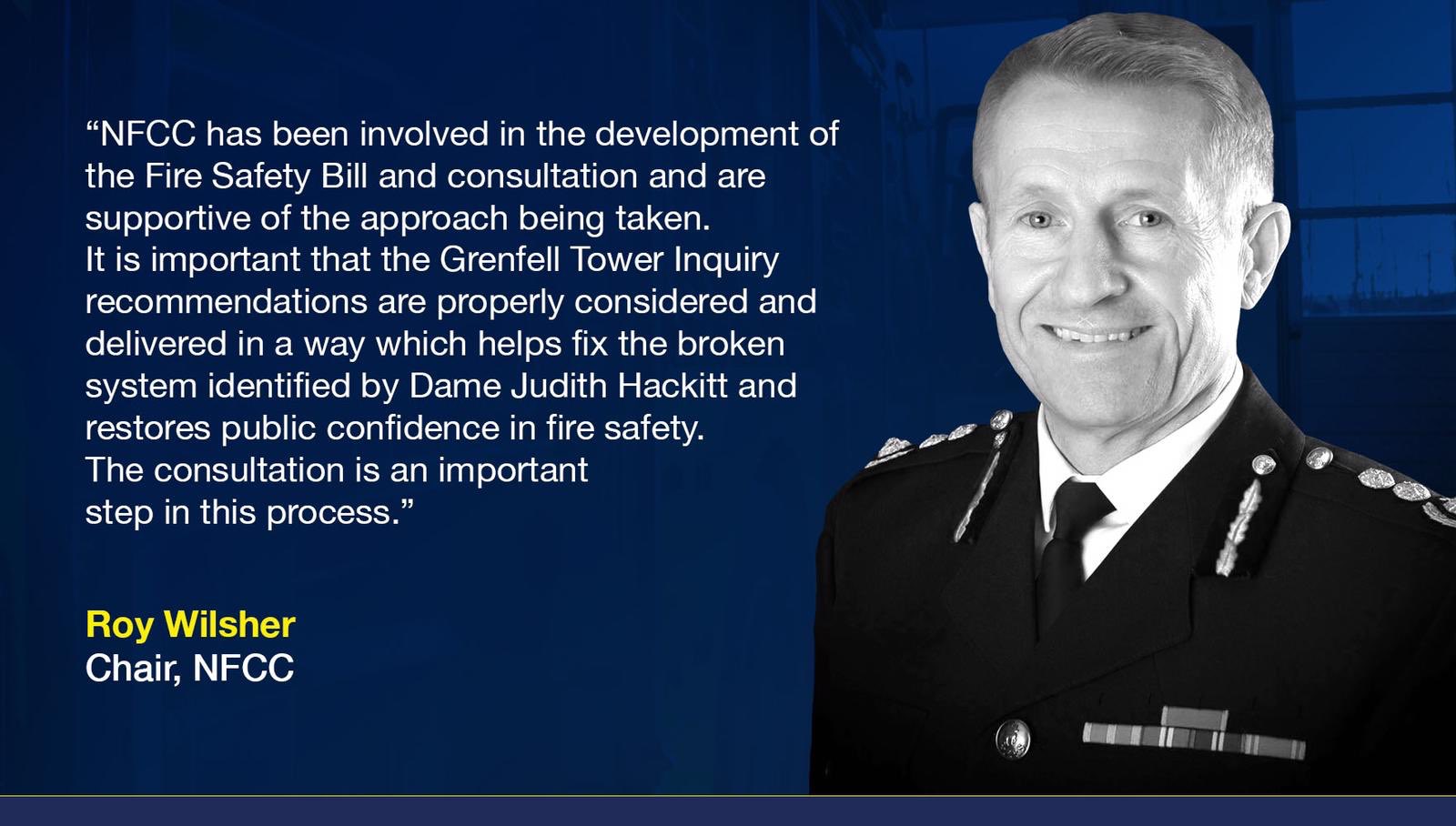 The Chair of the National Fire Chiefs Council even released a statement supporting our approach because he wants people to have a proper say on these new rules. It is unfortunate that the Labour party have decided to focus on political point-scoring rather than introducing robust legislation that looks to prevent tragedies, such as the devastating Grenfell Tower fire, from every happening.

I understand the frustration felt by many with how long this legislation has taken, however I am optimistic that this Bill will bring about positive lasting change. After the terrible fire at Beechmere care home last year, I will continue to push for sturdy and effective fire safety legislation that prevents these devastating fires. 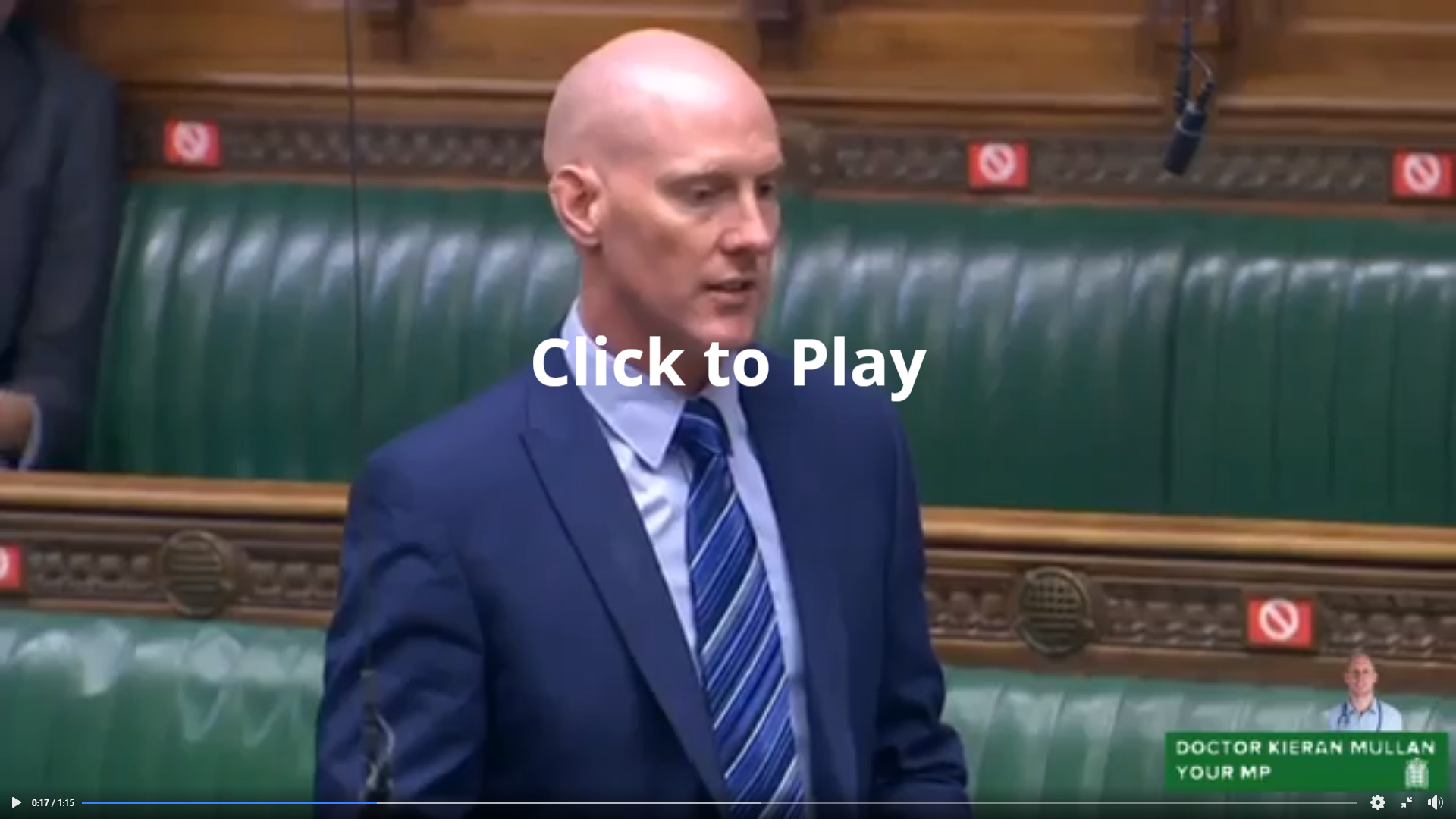 Sadly, the local Labour party have been telling residents that Leighton hospital will receive no additional funding ahead of the winter. This is simply not true.

But in the long term we also need significant investment in the whole of Leighton Hospital. We had a great success as a community getting investment in the A&E with thousands signing a petition for it. But the hospital was never intended to be used for this long and it serves a growing population.
So I am focusing on securing major long term investment for Leighton hospital. This will mean Leighton hospital can continue to deliver high quality health care to the residents of Crewe and Nantwich.

This week I asked the Health Secretary to meet with me to discuss getting that long term investment in Leighton hospital and he agreed to meet. Time to get to work! 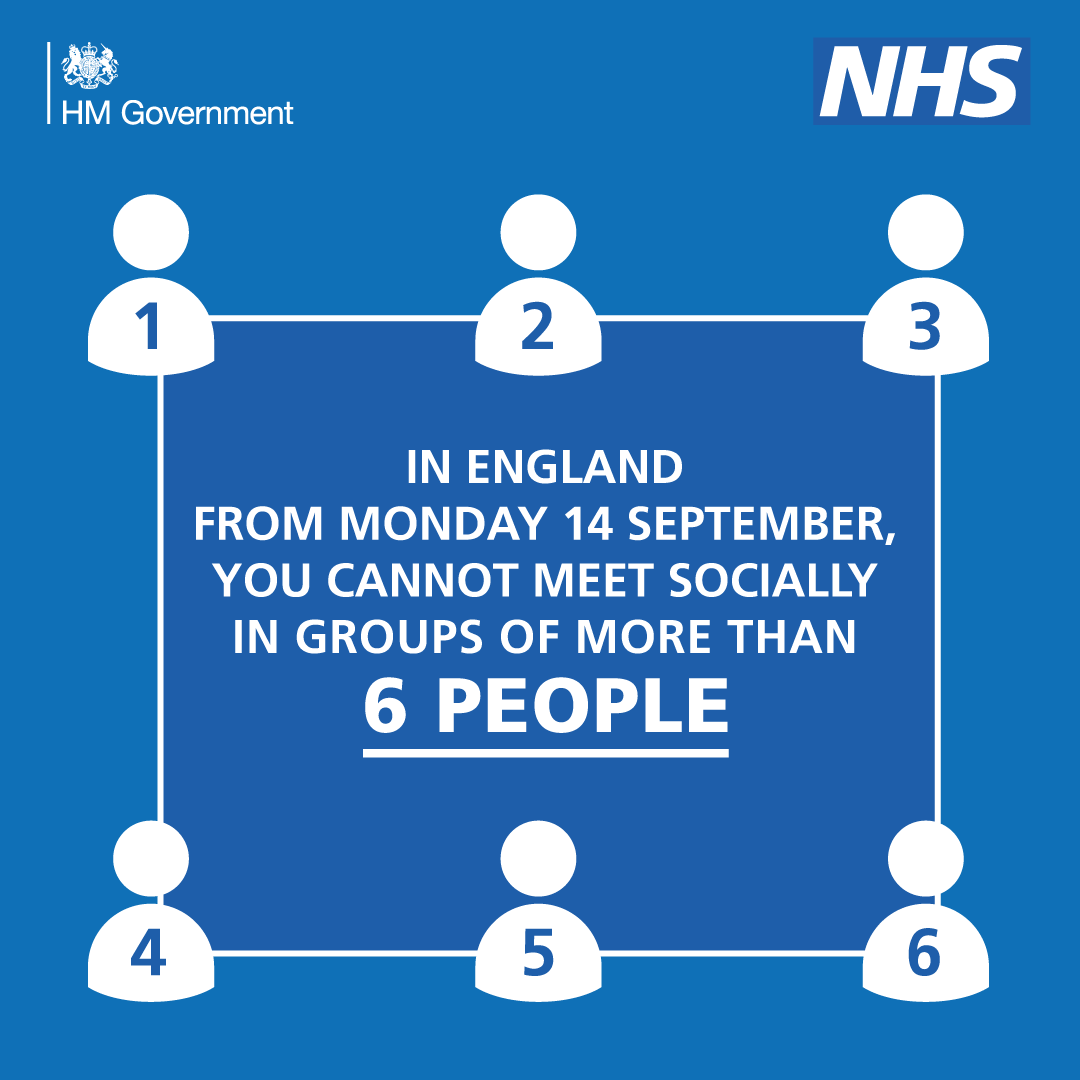 The single most helpful guide to all the rules is https://www.gov.uk/government/publications/coronavirus-outbreak-faqs-what-you-can-and-cant-do.

Here are the key things to know about the changes to the rules. I know it can be frustrating and sometimes hard to keep track. Ultimately there can be debate about what we achieve with each rule. There is never certainty. But I think in the end the government has to come up with one set of rules that it thinks is best. Even if not everyone can agree with every rule. Thank you everyone for your ongoing patience!

We are testing roughly half a million people a week now and thousands are going through the tracing system so we are learning lots more about where it is being passed on and that is in peoples homes and when socialising. That is why we have the new rule:

Rule of 6: From Monday social gathering rules will be simplified and strengthened with social groups being restricted to a maximum of 6, in both indoor and outdoor settings. Households of more than 6 will be exempt and the support bubble is included in that. It isn't in schools or workplaces because that isn't overall where the risk of spread is coming from. It is also vital we keep children in school!

A venue like a pub can have more than 6 people in overall but the separate groups must not mix. There are some other exclusions as well for example organised sport, charity and voluntary work.

In addition, to help Test and Trace it will be mandatory for businesses to have a system in place to ensure that test and trace data is collected properly. So please ensure to leave yours! I know it can be tempting to leave a fake name or number, but if everyone does that we could end up in a full lockdown. We all have to play our part!

Eat Out to Help Out local statistics: 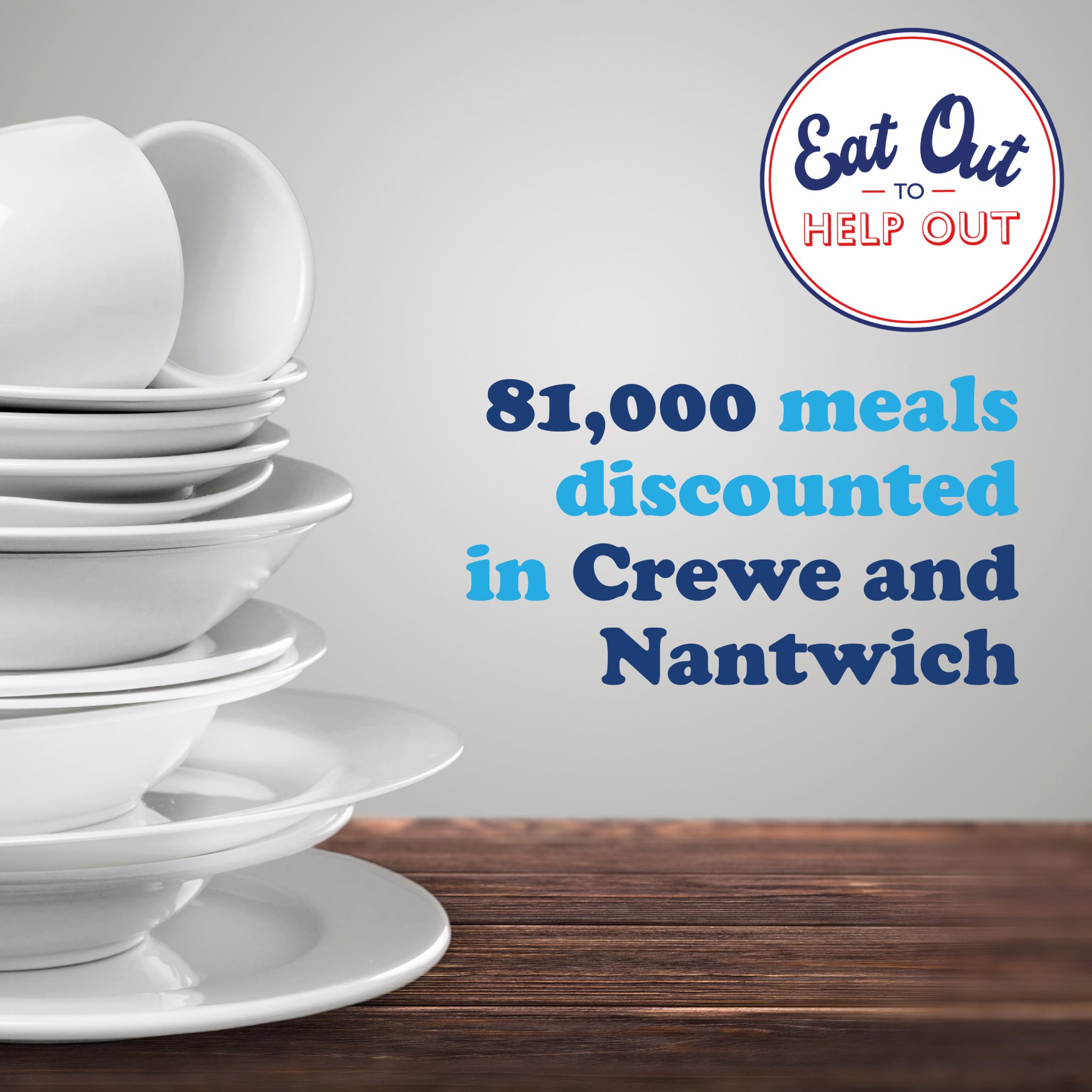 Pleased to see that the Government's 'Eat Out to Help Out' scheme has been such as success locally. In August throughout Crewe and Nantwich:

Whilst I know people have enjoyed this scheme, fundamentally it had the very important goal of getting our hospitality industry back on its feet to save jobs and businesses. Thank you to all Restaurant Owners, Staff and Customers for making this scheme so successful. 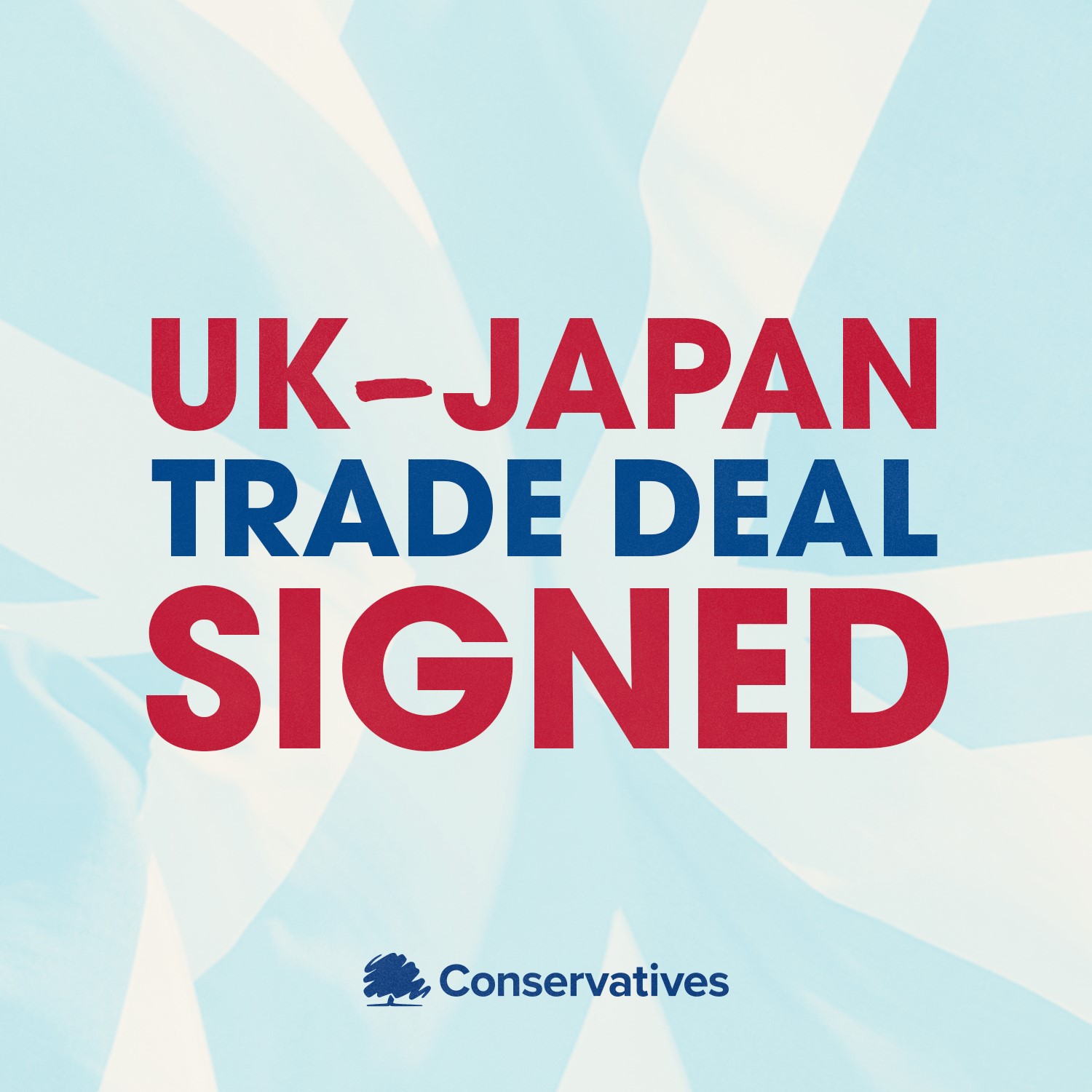 Proud that we have agreed a historic UK Japan trade deal!
This is a great deal for Britain, going beyond EU-Japan in key areas like digital & data, financial services and food & drink.

A British-shaped deal that delivers for the whole country. 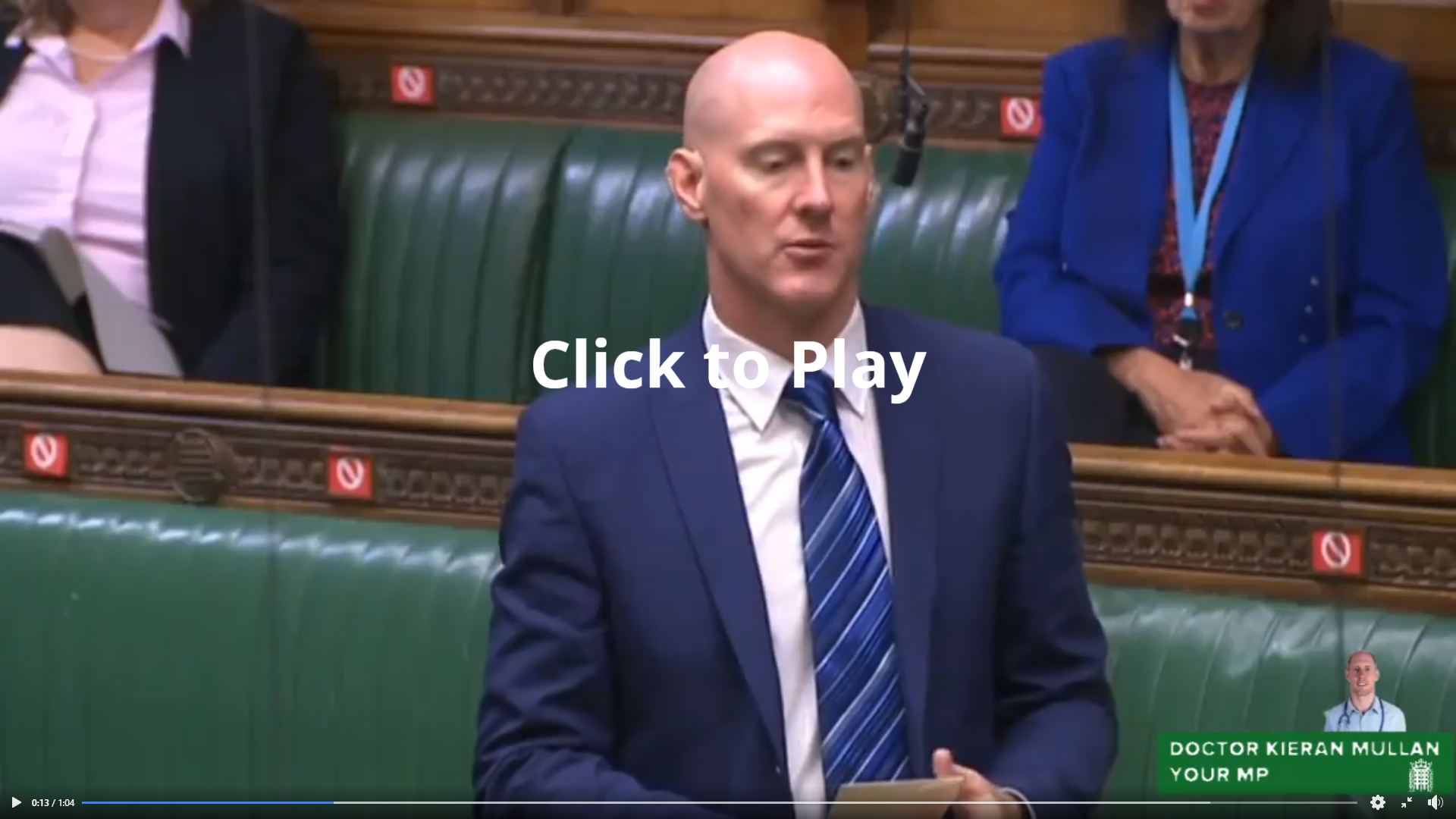 I know a number of small businesses in Crewe and Nantwich are concerned that they won't be able to take part in the new Kickstart scheme because to apply directly to the scheme you need to offer 30 job roles.
I raised this with matter the Secretary of State. The Minister confirmed that who confirmed that where businesses want to offer less than 30 roles, even just 1, they can group together to apply to the scheme.
I want to hear from any and all Crewe & Nantwich based employers (check here if you are in my area http://www.ukpolitical.info/Finder.htm) of all kinds whether charity or not for profit, small or large, that want to take part.
I am working with South Cheshire Chamber of Commerce and Industry to deliver a scheme for Crewe & Nantwich based employers so that businesses and young people are able to take full advantage of this scheme.
Register your interest below!
https://www.drkieranmullan.org.uk/news/get-board-kickstart-scheme

The following are road closures for the next week as reported by Cheshire East Council.