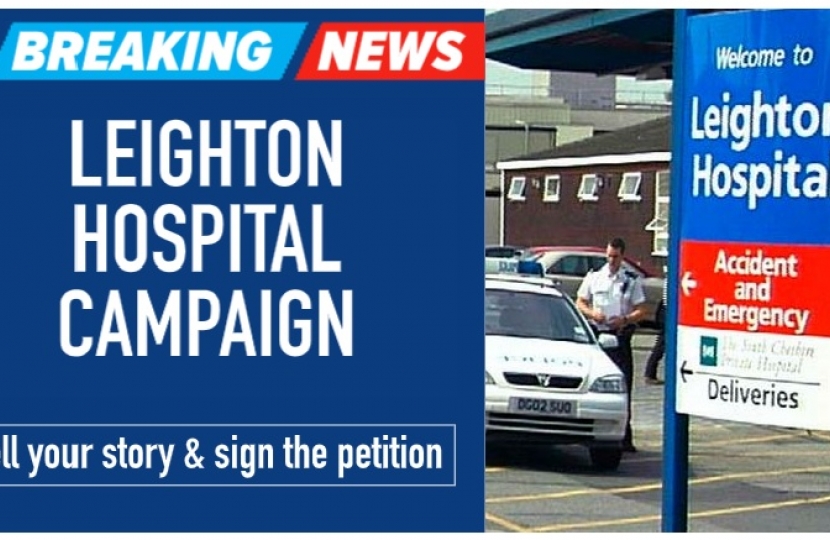 *Update, a brief outline of the concept has been published by Leighton which you can download below*

But in a surprise announcement, the government announced that a further eight sites would be chosen to extend the programme even further. Ahead of this announcement I have been making the case for major new investment in the Leighton Hospital site and I am now launching a campaign to have Leighton selected as one of the 8 final sites.

Leighton Hospital was built in the 1970’s and was never planned to still be in use today. It has benefited from a number of big investments in new theatres and other facilities. £15 million will be put into A&E this year and next year. But the reality is, add on blocks and new facilities can only take you so far. Leighton needs a fundamental rebuild and this funding opportunity is a unique one we need to grab with both hands. It will also be a chance to grow the hospital to meet the population increase we have seen locally over recent years.

As well as asking you to sign a petition to back the campaign, I am asking people to share their positive stories of theirs and their family members treatment at Leighton. The stories will be published over the coming weeks to build support for the campaign.

We had an enormous response from everyone as part of our campaign to get Leighton funding for it’s A&E, with thousands signing the petition. Now we need peoples help again to get behind Leighton. But I think what will really bring to life how important our local hospital is to this community is hearing the real life stories of where the staff and facilities there have come through for you at a time when you really needed them.

Our webform has a mandatory email address field for its petition setting. If you do not have one or want to share yours just put none@given.com in that box. Data collected as part of this campaign will only be used as part of  my work related to local health and social care provision.