Kieran calls for Court Injunction to protect the Barony 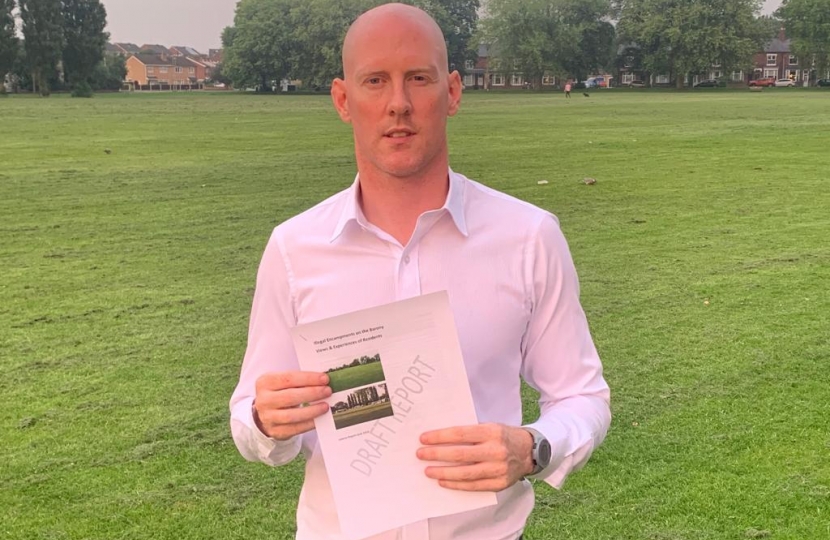 Crewe & Nantwich Conservative MP Candidate Dr Kieran Mullan is calling on Cheshire East Council to obtain a Court Injunction to protect the Barony and potentially other sites from illegal encampments after collecting evidence from residents that has revealed wide spread reports of dangerous driving and anti-social behaviour. Kieran has today published a draft report with interim findings after collecting the views and experiences of residents (download the report at the bottom of this page).

Speaking about the findings Dr Kieran Mullan said “I have been truly shocked about the experiences residents have been having after hearing account after account telling the same story. What worries me the most is the examples of what can only be described as dangerous driving that residents witness. Several of them said directly to me that they feared it was only a matter of time until someone is seriously injured. But they are also fed up with the rubbish being left behind and harassment and intimidation. Residents should not be told they cannot take their grandchildren onto the play area without paying and they should not have to watch people defecating in car parks and bushes.”

“The problem of illegal encampments on the Barony has been going on for years and residents have had enough. I am not interested in playing party politics on this issue or laying blame. The report I have released puts down in black and white the problems associated with the encampments and I am now determined we see decisive action immediately.”

Dr Kieran Mullan reviewed local government best practice nationally and has identified the use of Court Injunctions to proactively protect sites as a key tool that he is now calling on Cheshire East Council to use by obtaining one to protect the Barony and potentially other sites like Coronation Gardens and sites in Crewe.”

“At the moment we have to go through the same process of serving court orders each and every time and what we can now evidence is the extent of problems we get during the meantime. A court injunction would cut that time right down. We could see encampments moved on the same day they arrive. This issue has been raised with me by Barony residents but I know residents in Crewe and other areas are facing similar problems.”

Over the past two years, 34 Local Authorities have obtained Court Injunctions to prevent illegal encampments. Walsall Council has obtained an injunction from the County Court which restrains anyone from setting up encampments or causing a nuisance on 25 named sites. This application was innovative and was one of the first of this nature in the country to be secured and certainly the first in the West Midlands. On Monday (24th June) Kieran held a video conference with Cllr Gary Perry, Portfolio Lead for Leisure, Culture and Communities for Walsall Council to discuss their approach with Kieran and residents.

Speaking afterward Cllr Perry said “We know how important it is to make sure residents are not forgotten on this issue. Court Injunctions are a key tool among a range of different measures and I was very happy to come and talk to Kieran and residents about how we use them in Walsall. Kieran asked for my input because he saw the potential for using them locally.”

Dr. Mullan also asked residents to indicate whether they support the introduction of a barrier that could prevent the illegal encampments in the first place. Overwhelmingly they do (90%). Commenting on this Kieran said “It seems clear to me we must now move forward with a barrier in consultation with residents and use the court injunctions as an interim step until progress can be made on this. We know a barrier will create challenges in terms of events run on the Barony and not everyone wants one but residents that have given their views to this process clearly need to be listened to.”

“I would encourage any other residents that haven’t had a chance to share their experiences and views to do so. I have published this draft report but want to build on it with more residents input.”

“My wife and I had to abandon training our daughter to ride her bike because they were driving around on the field at high speed and we feared for our safety.”

“Cars that come off at the junction don't seem to look at the lights, they just drive off. I don't want someone to get hurt.”

“I have seen cars coming off the encampments very fast at the crossroads. One of my elderly neighbours was nearly hit. Another man was walking his dog and the same thing happened. He had to leap out the way. When he shouted at the driver they stuck two fingers up at him. I'm worried someone will be killed.”

“Over the recent months when we have seen the encampments on the Barony Park I have still been exercising my 2 dogs and twice I have had to stop to allow vehicles to drive by from the play area. I did challenge one of the vehicles when it came towards myself and my dogs as to why they couldn’t drive round the park on the road like everyone else and I was told that I shouldn’t even be on the playing fields with my dogs and they should be on a lead!”

“Intimidated local scout group when they were using the fields for their activities by driving round and round them in a circle. I have also seen them driving straight across the middle of the field and then cutting straight in front of me and then blocking my way when I was walking down the path at the Sainsbury’s end of the field. I have also seen children defecating in the bushes in the middle of the day when they were camped on Coronation Gardens.”

“Witnessed young boys around 13 /14 driving across the field. They headed towards an elderly man who was walking his dog. The dog was scared too.”

85% of participants had witnessed or been a victim of anti-social behaviour.

90% of participants support the introduction of a barrier.